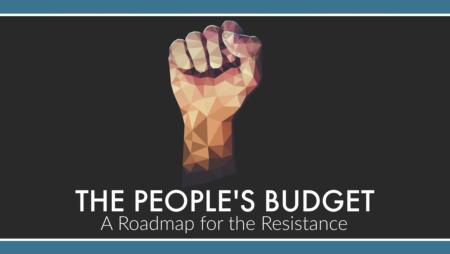 On October 4th, 2017, the U.S. Congress voted the People’s Budget proposal. This is a budget that claims for a reduction of Pentagon spending while implementing a fairer tax system for working families. The People’s Budget proposes significant investments in infrastructure, health care, the environment, housing, education and much more.

The U.S. Congress vote resulted on a record of 108 Democrats voting in favor, and key leaders like Republican Adam Smith on board. The majority of the Massachusetts House delegation voted in favor of the People’s Budget for the first time.

The Congressional Progressive Caucus (CPC) has – for five years – helped to lead the charge for a different kind of budget for the nation: one that focuses on job creation and public engagement alongside drawing down the deficit; and one that takes progressive, alternative solutions and implements them into a budget which works for all. The People’s Budget incorporates both of these principles. It takes the name from the 1909/1910 UK initiative which introduced unprecedented taxes on the high incomes of Britain’s rich to fund new social welfare programs.

The People’s Budget would help step America back from its endless war footing in the Middle East by prohibiting any expansion of U.S. combat troops in Syria, and reducing Pentagon spending. Planning for a proactive and just foreign policy, it would also invest in robust diplomatic and humanitarian strategies needed to address current conflicts and prevent new ones. Its budget priorities would promote the welfare of our families and our earth and promote peace.

As mentioned in the Executive Summary of People’s Budget, the pillars of a democratic society include quality health care, child care, schools, and retirement for everyone. And yet in the world’s richest country, these essentials are painfully out of reach for tens of millions. The People’s Budget is prepared to fund universal child care, to increase access to health care, to strength public schools and universities, to provide a humane immigration reform, and to expand Social Security.