“£205 billion of public money is a huge amount. Pouring it into a nuclear weapons system that experts say could be rendered obsolete by new technology is hardly a wise choice. Far better to spend it on industrial regeneration, building homes, tackling climate change or meeting our defence needs in usable ways” 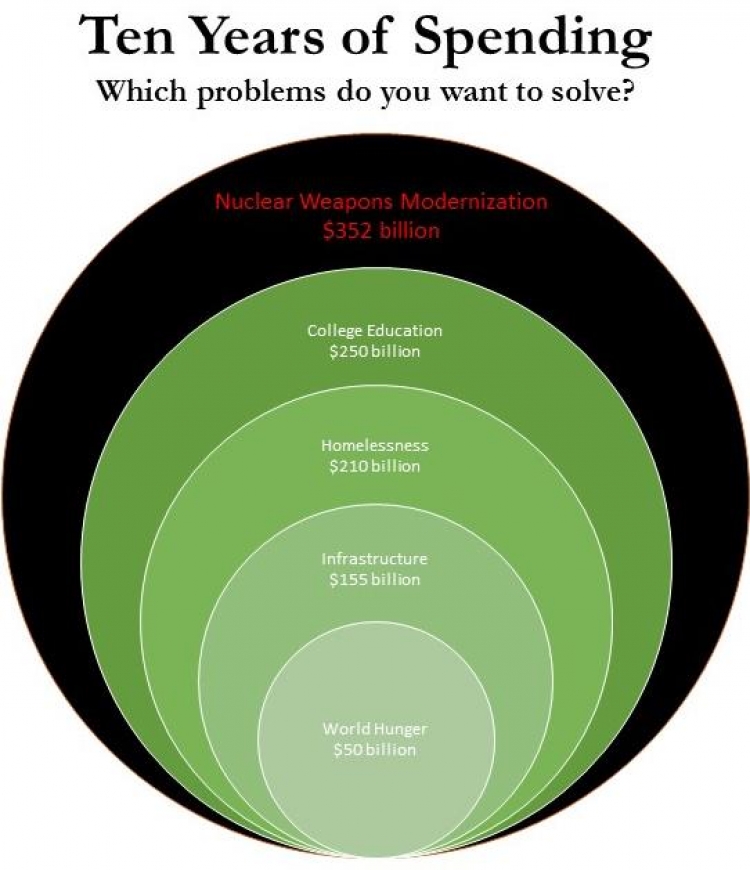 Instead of pursuing negotiations for worldwide abolition of nuclear weapons, the US is planning a total overhaul of its nuclear weapons program, including new generations of nuclear warheads, bombers, land-based missiles, air-launched missiles and submarine. The projected price tag? About $1 trillion over the next thirty years, or an average of $30 billion a year until the middle of the 21st century!  For more on US plans for GDAMS 2016, see FULL TEXT

The spectacular gains of the Scottish National Party (SNP) in the general election are a stark indicator of opposition to the UK’s Trident nuclear weapons system, which is based in Scotland, the Campaign for Nuclear Disarmament has said.

The meteoric rise of the anti-Trident SNP has seen their number grow from 6 MPs in the previous parliament to 56 MPs, in an unprecedented election which saw swings of almost 40% to the SNP in some seats. This huge influx comes ahead of the final vote on whether or not to replace Britain’s ageing nuclear weapons system, expected in early 2016. Continue reading –>

Decommissioning Trident nuclear weapons would be popular with voters and supported by a majority of candidates standing in the general election, luminaries from music, the arts and the legal world have claimed. Continue reading–>

According to SIPRI’s latest report, issued on Global day of Action on Military Spending, world military expenditure totaled $1.75 trillion in 2013, which amounted to 2.5% of world GDP. In 2011, it was estimated that $105.9 billion was spent on nuclear weapons, and a recent study from the James Martin Center for Nonproliferation Studies shows that the US alone will spend over one trillion dollars over the next thirty years on maintaining, replacing, and upgrading existing nuclear weapons systems.

We are repeatedly assured by the nuclear-armed states that a gradual, step-by-step approach to disarmament is the only way forward, and any alternative initiatives are ‘distractions’ that threaten to derail the ‘progress’ made. However, nuclear-armed states continuously redefine any agreed disarmament objectives, throwing up smoke screens and pouring millions of taxpayer dollars into weapons that would cause an instant humanitarian catastrophe if ever detonated.

With the existence of nuclear weapons there is always the chance of an accident – Eric Schlosser’s recent book Command and Control makes it clear that the US grossly under-reported the number of serious accidents involving nuclear weapons. In many instances it was either extraordinary bravery or sheer luck that prevented the unthinkable from happening. Lest we think that the lessons have been learned, we need only refer to the seemingly endless list of scandals involving those tasked with the supervision of nuclear weapons. Meanwhile, policies of “nuclear deterrence” and military doctrines of nuclear-armed states make the use of nuclear weapons an ongoing potential threat.