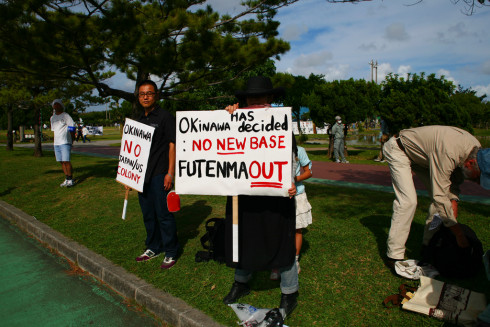 Okinawa Council Against Henoko New Base, Noam Chomsky and Jeremy Corbyn will be the winners of this year’s Séan MacBride Peace Prize. The International Peace Bureau awards the Séan MacBride every year to a person, organisation or movement in recognition of its outstanding work for peace, disarmament and human rights.

As can be read in this press release by IPB, Okinawa Council Against Henoko New Base will be honored for its unflagging commitment to close the Futemna Marine Air Base, which is widely seen as one of the world’s most dangerous military bases, and for its nonviolent opposition to the construction of a massive new air, land and sea base in Henoko.

Noam Chomsky will be awarded for his tireless commitment to peace, his strong critiques to U.S. foreign policy, and his anti-imperialism, and Jeremy Corbyn – for his sustained and powerful political work for disarmament and peace. As an active member, vice-chair and now vice-president of the Campaign for Nuclear Disarmament in the UK he has for many years worked to further the political message of nuclear disarmament.

The prize ceremony will be held on Friday, 24th November in Barcelona. There will be a press conference on the same day at 11am.

26 May 2015. IPB is delighted to publish the following message from the former Director-General of UNESCO:

Dear admired friends,
Many thanks for your message concerning the new Global Campaign on Military Spending. I repeat every day – because it is a crucial issue for my behaviour and personal commitment – that it is intolerable that nearly $1800 billion are invested annually in military expenditure and armament for the “security” of less than 20% of humanity, while (according to the World Food Program) more than 3 million children under five die of hunger. This is really unacceptable. Continue reading–>

IPB was represented at this year’s Summit by Secretary-General Colin Archer and Board member Lisa Clark.  Mr Archer spoke to a packed auditorium on the 4th panel, entitled ‘Living Peace, Reconciling Communities.’  His announcement that the Global Campaign On Military Spending (GCOMS) had been launched on Human Rights Day, 10 Dec  was warmly applauded.
END_OF_DOCUMENT_TOKEN_TO_BE_REPLACED