This first Japanese Prepcomm for the Berlin congress was held on January 31, 2016 under the auspices of Meijigakuin University. Professor Takao Takahara (International Peace Research Institute (PRIME), Faculty of International Studies) put together an interesting programme. 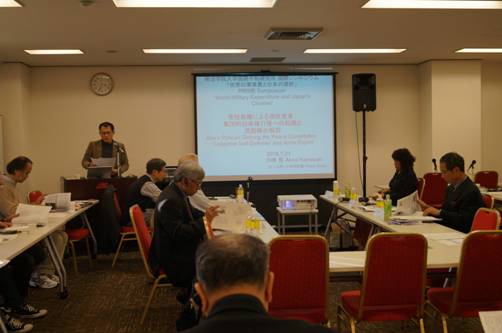 The symposium was attended by some 60 participants, both students and activists, and was moderated by Prof. Takahara himself and Yayoi Tsuchida of Gensuikyo.  While the meeting did not formulate any specific conclusions, the presentations are worth reading as background material on these important and indeed complex topics.

PRIME plans to come up with further public fora like this one, before and perhaps also after, the Berlin Congress, since, according to Prof Takahara, “the topic is especially important in the contemporary Japanese context; we might observe a major change to our demilitarized economy and society.”

Over the next few weeks at the United Nations the Nuclear Non Proliferation Treaty (NPT) Review Conference will be in session, and the central question is will it go down in history as another lost opportunity or the dramatic turning point that millions of people around the world are hoping for? Continue reading–>

The latest round of climate talks just concluded in Lima, Peru after two tense days of overtime negotiations. The talks produced a new document, the Lima Call for Climate Action, that sets up the framework for negotiations on a new climate treaty that will be decided in Paris next year. Overall, however, the talks were a disappointment. Politicians failed to build on the momentum created by the climate movement, through events like the People’s Climate March, and kicked many of the big debates down the road. If we’re going to get a successful outcome in Paris – one that could be a real stepping stone in reducing emissions and building international solutions to combat the climate crisis – then negotiators, and our movement are going to have to step things up a notch.
END_OF_DOCUMENT_TOKEN_TO_BE_REPLACED

On the occasion of the Global Day of Action on Military Spending, the United Nations Independent Expert on the promotion of a democratic and equitable international order, Alfred de Zayas, calls upon all governments to proactively inform the public about military expenditures and to justify them:

“Every democracy must involve civil society in the process of establishing budgets, and all sectors of society must be consulted to determine what the real priorities of the population are.

“Lobbies, including military contractors and other representatives of the military-industrial complex, must not be allowed to hijack these priorities to the detriment of the population’s real needs.”

The UN has also called on parliaments to implement the will of the people and significantly reduce military expenditures, whether in the field of arms production, military research, military bases abroad, surveillance of private citizens, ‘intelligence’-gathering, or overt and covert military operations.

Jim Mc Cluskey, author of The Nuclear Threat, published today an article about the recent development in nuclear disarmament.

“Citizens of the world have simultaneously become aware that the nuclear states do not intend to get rid of their nuclear weapons and that their existence imposes a permanent and intolerable threat to us all. The existence of nuclear weapons means they could be used by accident, by misunderstanding or by malicious intent. How can we ever be sure that some deranged psychopath will not gain power in one of the nuclear states and deceive him/herself into believing that it is in their best interests to make a first strike? How can we ever be sure that some terrorist organisations will not hack into the electronic control systems and carry out the launching themselves? […]

The only remedy is an enforced world ban on the existence of nuclear weapons. The other weapons of mass destruction have already been banned. It is the turn of the last and most destructive of them all.

And finally there is hope. The huge burgeoning of awareness in the citizens of the world is bearing fruit.”

For more information about the civil sociery efforts in banning nuclear weapons, please refer to the International Campaign to Ban Nuclear Weapons ICAN.