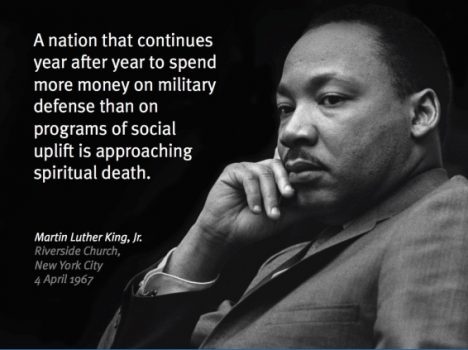 Download the  “kit” to help you organize a reading

April 4, 2019 will mark the 51st anniversary of Dr. Martin Luther King, Jr.’s tragic and untimely assassination, and the 52nd anniversary of his prophetic speech, “Beyond Vietnam: A Time to Break Silence”. United for Peace and Justice encourages you to honor Dr. King’s full legacy by organizing a public reading of the speech in your community. We have prepared a “kit” to help you organize a reading. And you can download some printable posters here.

When Dr. King gave this speech, the United States was embroiled in the Vietnam War. The country was in turmoil as peace activists resisted the draft, and anti-war and civil rights protesters took to the streets. King’s speech laid bare the relationship between U.S. wars abroad and the racism and poverty being challenged by the civil rights movement at home. And it was controversial in some parts of the civil rights movement.

Dr. King’s words were both precautionary and prophetic, providing both a diagnosis and a cure – “a true revolution of values” – for our society’s gravest illnesses, “the giant triplets of racism, extreme materialism, and militarism.” And they have never been timelier.

The U.S. has been at war in Iraq for more than 27 years. Today, the U.S. continues to wage wars around the world as tensions among nuclear-armed nations rise to levels not seen since the darkest days of the Cold War. The endless wars have cost millions of lives and trillions of dollars, while the needs of growing numbers of Americans go unmet.

The President’s budget request for 2020, released on March 11, would slash funding for nearly every agency except the Pentagon. Trump’s budget calls for $750 billion in military spending, a nearly 5 percent increase over 2019 spending. And it calls for a 9 percent cut in all other discretionary spending, including education, affordable housing, environmental protection, scientific and medical research, public health, diplomacy and more. It also calls for additional cuts to Medicare, Medicaid and Social Security.

In his “Beyond Vietnam” speech, Dr. King declared: “A nation that continues year after year to spend more on military defense than on programs of social uplift is approaching spiritual death.”

This year, we join with the Poor People’s Campaign: A National Call for Moral Revival, in working to achieve Dr. King’s “revolution of values”. And we associate ourselves with the upcoming Global Days of Action on Military Spending to demand: “Demilitarize: Invest in People’s Needs!”

On this day of remembrance honoring Dr. King, let’s call on our country to reverse course and turn towards humanity, law and decency. Let’s honor the full legacy of Dr. King’s work opposing militarism, racism and poverty – the “axis of evil” in the struggle for peace and justice.

Thanks for all you do for peace and justice! – The UFPJ Coordinating Committee