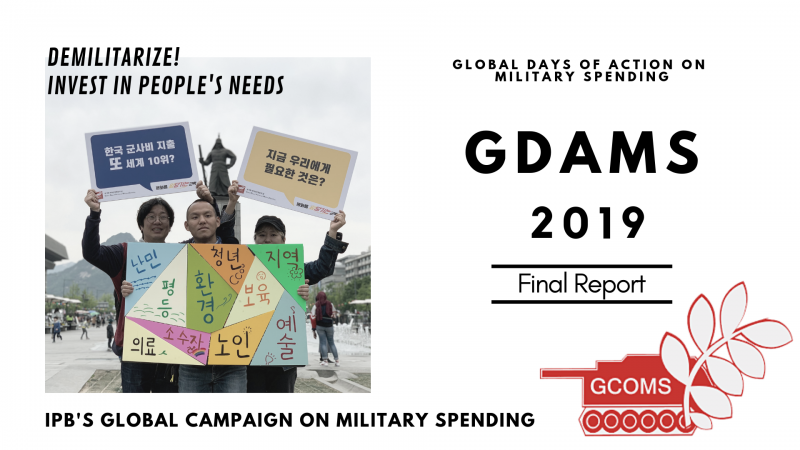 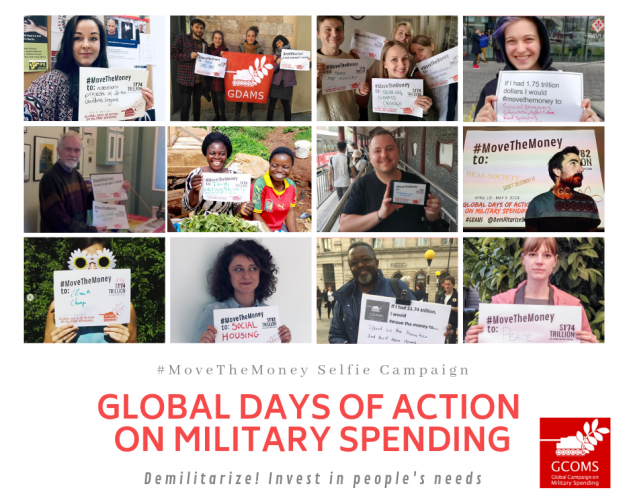 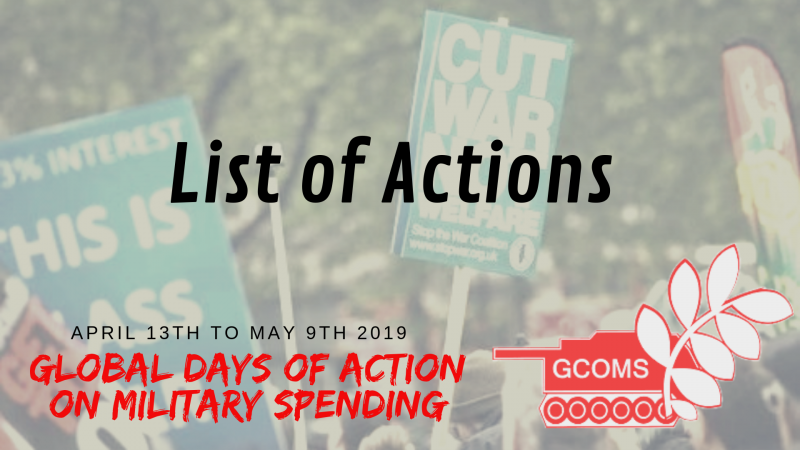 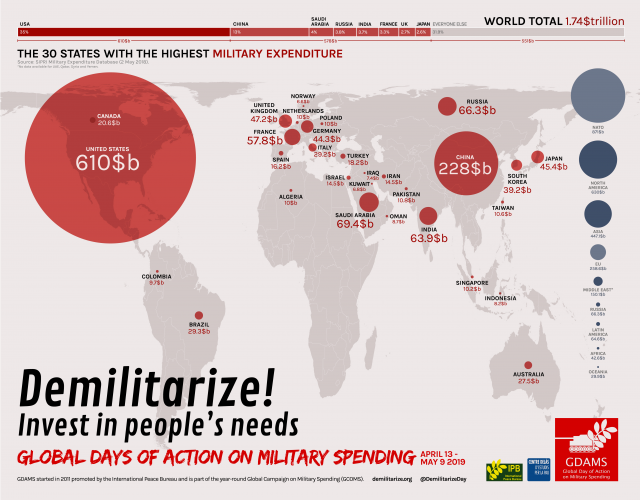 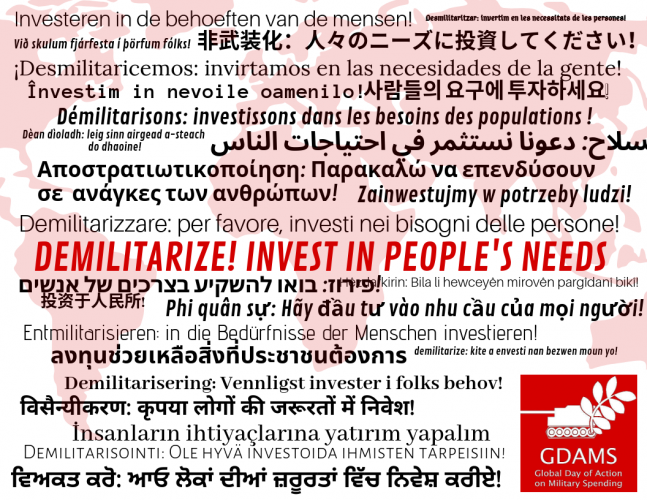 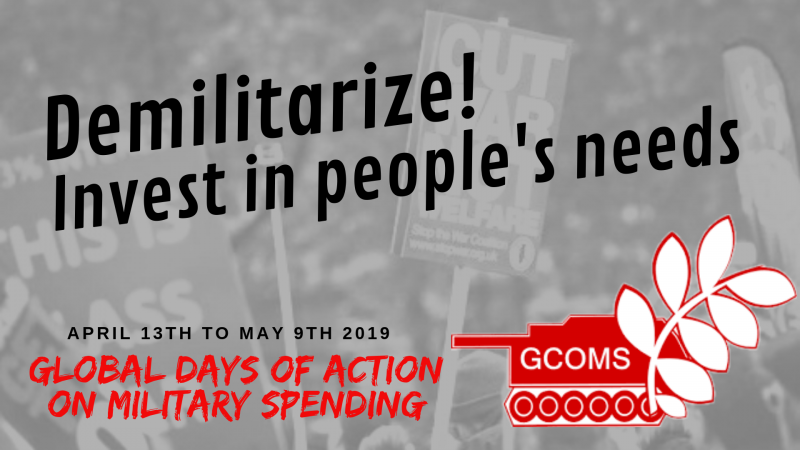 Four press conferences took place on April 29 in Berlin, Seoul, Barcelona and Sydney on the occasion of the Global Days of Action on Military Spending (GDAMS) and the releasing of new data on military spending for the year 2018 by the Stockholm Peace Research Institute (SIPRI). Military spending is estimated to have been $1,82 trillion in 2018, a 2,6 per cent higher than in 2017. All four press conferences presented a critical analysis to this exorbitant spending and claimed for the redirectioning of this resources to cover the needs of people and the planet.

END_OF_DOCUMENT_TOKEN_TO_BE_REPLACED 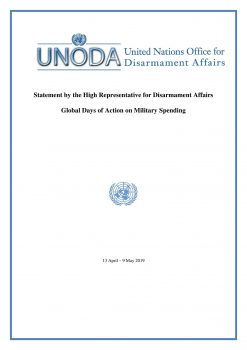 Upward trends in militarization continue unabated. Global military spending is at its highest since the end of the Cold War.
At the same time, the complex challenges facing the world demand innovative solutions – far from dispatching battle ships or launching artillery. A comprehensive strategy to bring about peace, well-being, and a prosperous future for all was articulated in the 17 Sustainable Development Goals. END_OF_DOCUMENT_TOKEN_TO_BE_REPLACED 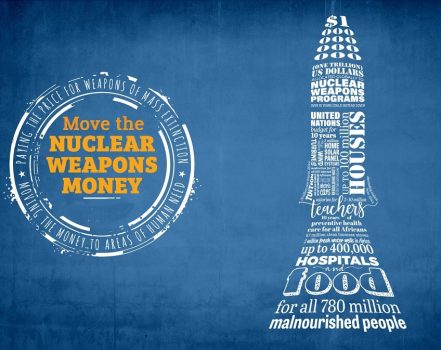 A representative of IPB’s Global Campaign On Military Spending (GCOMS) participated on April 12-13 on the international conference Move the Nuclear Weapons Money: Invest in the Future, which was hosted by the Basel City Kanton/government and brought together legislators (parliamentarians and city councilors), climate change and disarmament experts, investment fund managers and activists to address and reverse the corporate and financial interests which are maintaining a fossil fuel based economy and a nuclear arms race.

1.   Divestment from nuclear weapons and fossil fuel industries:
2.   Investment in peace and sustainability, with a focus on investments by governments, pension funds, cities, universities, religious organizations and banks.

Conference participants gave numerous examples of fossil fuel and nuclear weapons divestment. Although the amount of money divested globally so far is moderate, the range of examples indicate the potential to move considerably more money from fossil fuels and nuclear weapons to better things, and so make a real contribution to climate protection and disarmament.

Quique Sánchez, the GCOMS representative, introduced the campaign as an example of activists’ networking and cooperative work. His presentation took place on the second day of the conference, which was coincidentally the kick-off of the Global Days of Action on Military Spending (GDAMS). He put an emphasis on this special period of action, which takes place from April 13 to May 9 under the motto ‘Demilitarize! Invest in people’s needs’. GDAMS is directed to raise awareness on exorbitant military expenditures and increasing global militarization, and in line with this he highlighted the $ 1.74 trillion spent in the military the previous year, which should have instead responded to actual human and environmental needs. 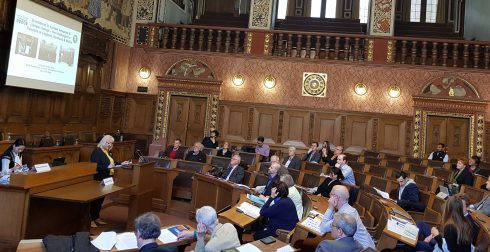 Jordi Calvo Rufanges, International Peace Bureau Vicepresident, GCOMS Coordinator, Centre Delàs for Peace Studies Coordinator and Researcher.
This article is extracted from his presentation at the AEPF’s International Conference on Universal Protection and Labour in Kathmandu (Nepal) on April 5, 2019.

END_OF_DOCUMENT_TOKEN_TO_BE_REPLACED

2019 Global Days of Action on Military Spending (GDAMS) have already started and will go on until May 9. This special period of actions is based on the cooperative efforts of more than 100 pacifist organizations around the world, and for the occasion we have prepared these 2 infographics using data from the Stockholm International Peace Research Institute (SIPRI). Please feel free to use them and share them so we can get the word out on the nonsense of militarization!
Click on the images to download them full size: 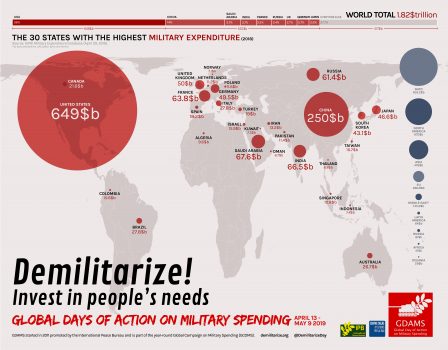 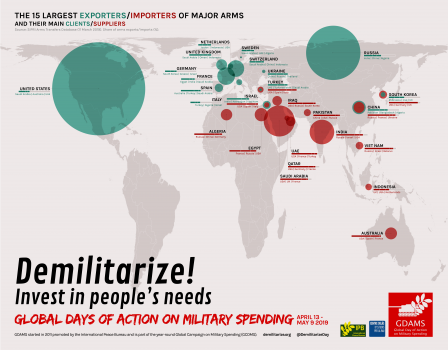 Download the infographic on military spending for the year 2017 here.

« Previous Page
Next Page »
Look at all GDAMS 2019 actions