Japan Council against A & H Bombs (GENSUIKYO) is organizing the 2014 World Conference against Atomic and Hydrogen Bombs from August 2nd  to 9th, under the theme: “For a Nuclear Weapon-free, Peaceful and Just World”. This is to mark the  69th anniversary of the atomic bombings of Hiroshima and Nagasaki. This year’s World Conference is being held on the eve of the year 2015, when the next NPT Review Conference will be convened, and 70th anniversary of the A-bombings will be commemorated.

They highlight that the world is making progress toward a total ban and elimination of nuclear weapons. More than two-thirds of the UN Member States are calling for a start of negotiations for a treaty banning the production, possession and use of nuclear weapons.  Increasing focus on the humanitarian consequences of nuclear weapons, as represented by the A-bomb damage of Hiroshima and Nagasaki, has contributed to strengthening the momentum for their abolition.

The world trend seeking “a nuclear weapon-free world” has been built up by the voices and actions of the Hibakusha and the people across Japan and the world.  Towards the 2015 NPT Review Conference to be held in New York next year,   more people should be reached out to, to expand cooperation and strengthen solidarity and develop this trend to achieve “the peace and security of a world without nuclear weapons,” which was agreed in the 2010 NPT Review Conference.

The A-bombed Japan must take the lead in the efforts to achieve a total ban and elimination of nuclear weapons, standing on Article 9 of the Constitution and the “Three Non-Nuclear Principles”.  Only by promoting nuclear-free and peace diplomacy, Japan can truly contribute to peace of Asia and the world.  We the people of Japan must raise voices and take actions to stop maneuvers of the Abe Government for making Japan a war-waging country, and to create a nuclear-free, peaceful Japan.

The 2014 World Conference against A and H Bombs will be a place to rally the voices and actions of the people from across Japan and all over the world.  The Conference is open for national governments, public organizations, local authorities, NGOs and grass-roots movements to join together to deepen solidarity and cooperation for common efforts to secure the survival of human race.  It also provides a space to exchange views among people of all generations to ensure the present and future of the world.  Solidarity with all nuclear victims will be also stressed and developed, including with the victims of the nuclear disaster of TEPCO Fukushima Daiichi nuclear power plant.

So the Japan Council against A & H Bombs calls for the support and joining in the 2014 world conference. It indicates that for the success of the conference, the signature Campaign for the “Appeal for a total Ban on Nuclear Weapons”, A-Bomb exhibitions and other grass-roots  activities need to be developed. In the lead up to the August, it aims to achieve the success of the March 1 Bikini Day events and Nation wide Peace March with active participation of the people at the grass-roots.

Click on the image below to see the schedule of the conference. 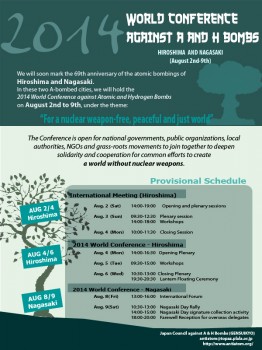