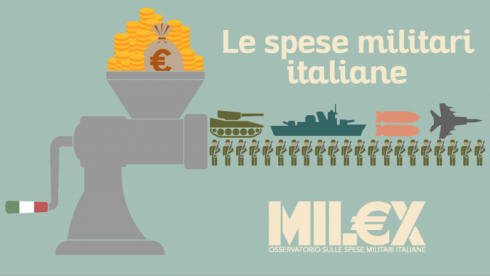 Italy is the 11th country in the World regarding military spending, with a 1.5% of their GDP. This percentage is higher than the one in other NATO countries like Germany, Spain, the Netherlands, Canada or Belgium. The Italian Observatory on Milex has produced a video that presents their Milex data in a very comprehensible way. The video can be watched in this webpage.

From 2006 to 2017, Italian Milex has increased a 5.5% in real terms. A significant part of it is hidden in official data, being assigned to the Italian Ministry for Economic Development instead of the Ministry of Defense. The video also shows that an important amount of weapon acquisitions have not been not based on real operative needs, but on the interests of the national and foreign military industry lobbies. Milex has becomed now now a guarantee for the sustainability of a military complex which is strongly oversized.

The Italian Observatory on Milex believes that a serious and thorough evaluation of  country’s expenditure is crucial to proper democratic control. This evaluation can not be conducted without a precise and competent study work, which requires time and professionalism. Although it is not easy to deal with these issues, which for many should continue to remain hidden, opaque, little-known, this video is a very important contribution to Milex transparency.