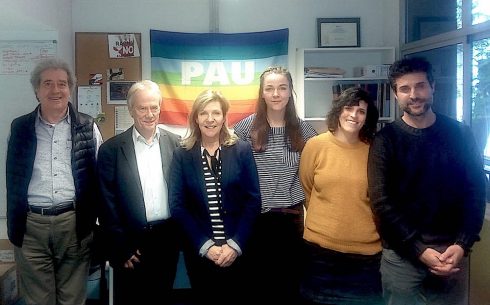 On December 12 and 13, the Barcelona decentralized office of the International Peace Bureau hosted a meeting between the offices of Berlin, Geneva and Barcelona. The meeting was attended by the director of the International Peace Bureau Reiner Braun, the coordinator of the Geneva office Arielle Denis, the vice president of the IPB, Jordi Calvo, the two reponsibles of the Berlin and Barcelona offices, Theresa Kresse and Ainhoa Ruiz, and one of the volunteer coordinators of the GCOMS campaign (Global Campaign on Military Spending) of the IPB, Pere Brunet.

The meetings aimed to address the main challenges that disarmament presents worldwide and, specifically, in the IPB campaigns. This was discussed in a context of global re-militarization in which some governments are questioning international treaties as the Intermediate-Range Nuclear Forces (INF). During this debate, the need to organize a 2021 World Congress discussing these issues was raised, as a continuation of the Berlin 2016 Congress.

The situation of the campaign promoted by the IPB, GCOMS, of which the Barcelona office is the coordinator was also discussed, with an special focus on some great challenges related to the fact that the number of organizations dealing with military spending in their countries is still low. Among other topics, proposals were also addressed for the Mac Bride 2019 award, and various technical, communication and internal cooperation aspects among the three offices were discussed.

The program also included a series of meetings with some Catalan institutions such as the Barcelona City Council and the Department of Cooperation for the Development of the Catalonia Government (Generalitat).

The Interoffice meeting was very positively valued, being useful to advance on potential work topics and future projects, and to discuss organizational issues for joint activities. On the other hand, it also served to provide ideas on some essential aspects of coordination and to improve internal communication among technical persons, as well as addressing the future challenges that the three IPB offices will have to share regarding disarmament.