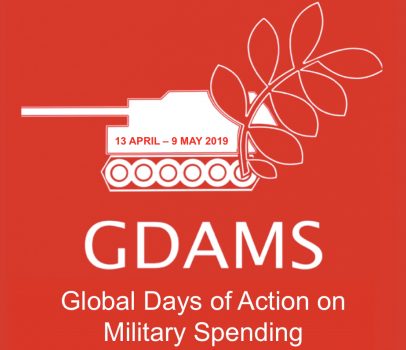 GCOMS incorporates the Global Days of Action on Military Spending (GDAMS). GDAMS usually starts in mid-April, on the Tax Day in the U.S. (a traditional moment in the calendar for civil society to challenge the uses of U.S. public money), and includes the day in which the Stockholm International Peace Research Institute (SIPRI) publishes the global annual military expenditure figures, together with an analysis of its trends.

This year, GDAMS will include the period from April 13th to May 9th. Having a period of several action days offers GDAMS campaigners a more flexible scope to choose a suitable moment to organize events that fit local or national contexts.

We are in a time of escalation and military tension around the world. NATO demands its member countries to increase their military spending by reaching 2% of their GDP, generating tensions with non-member countries of the North Atlantic Treaty Organization. This is an expense that goes in detriment of social spending.

Global military spending already accounts for 2.3% of global GDP and deviates resources to the military field that are crucial to achieve sustainable human development and the effective enjoyment of economic and social rights, enshrined in the International Covenant on Economic, Social and Cultural Rights of the Charter of the United Nations, as well as Human Rights in general. Peace and Development organizations estimate that with a 10% reduction per year and country of resources invested in the arms and defense sectors, the main goals set by the United Nations under the Agenda 2030 of the Sustainable Development Goals could be achieved.

Militarism contributes with serious impacts on people’s lives and the risks they face to their integrity, according to the latest UNHCR report, there are 65.6 million people displaced, of which 40,3 million are in the country itself, 22,5 million are refugees in other states and 2,8 million asylum seekers. These are forced displaced persons due to conflicts like in Syria, Yemen, Afghanistan, Iraq and Palestine, among others.

Moreover, the USA Trump goverment has increased US $ 54,000 million in military spending and has shaken its mandate with attacks on Yemen, Syria and Afghanistan, and renewed threats to Qatar, North Korea and Cuba and everywhere. In addition, we are at a time when some important treaties are being questioned and rejected, like the Intermediate-Range Nuclear Forces (INF). USA expands military bases in the Pacific. At the same time, the Australian government has announced an ambition to join the world’s top10 arms exporters in the world, instead of its 20th placing at the moment. They have put aside $3.8 billion to subsidize Australia arms manufacture.

At European level, the European Defense Action Plan authorizes for the first time the allocation of EU funds to the common defense and opens the door to allocate 90 million euros in three years, 30 million in 2019, to research and development in the military and security field. The proposal of the European Commission includes financing this Community fund of Defense with 1,500 million Euros per year from 2021. We observe also the worrying trend of arms companies penetrating University by providing chairs and funding for courses and research for their malicious ends.