A million thanks to you for taking action and supporting the events on the ground and on social media. Thank you for organising 128 physical actions in 21 countries and social media campaigns.

All of these add up to the GDAMS global movement’s efforts to persuade governments to reallocate the global military spending and move the money to urgent human needs.

Kindly click on any region to read the regional stories and photos. Scroll down a bit to see the international organisations’ events. 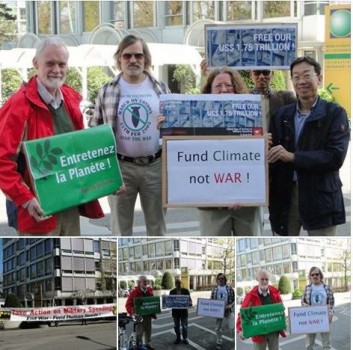 Picket at the International Environment House.

Colin Archer, IPB Secretary-General, introduced the Global Campaign on Military Spending and addressed the question: Which priorities for public investment: military, development, climate? In his wide-ranging talk he challenged the idea that investments in the military are an effective way of assuring security. He made reference to the financing of the Sustainable Development Goals and the Green Climate Fund, both of which could be achieved if a substantial reallocation were made from the global military spending total ($1776bn). 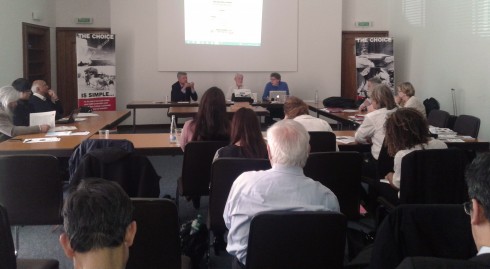 Discussion topics included the implementation of the Arms Trade Treaty, the role of banks in funding militarism, and the growth of ethical finance.

The meeting was chaired by Jarmo Sareva, Director, UN Institute for Disarmament Research, UNIDIR. He concluded the seminar with a final set of remarks.

This year’s Day of Action comes at a time of increasing tensions in several regions, and signs of political pressure to spend more from the public purse on the military and to sell yet more weapons both at home and abroad. At the same time governments and the UN are urging greater financial commitments both to the Post-2015 Development Agenda, and to efforts to tackle the climate change crisis. The meeting is an opportunity to take stock of the facts and to explore what can be done at various levels.

Rev Paul Lansu is Senior Policy Advisor at Pax Christi International and Vice-President of the IPB Board.