Nova Scotia Voice of Women for Peace took to the streets to conduct the survey– “What would you do with the $1.75 trillion being spent globally each year on the military?” 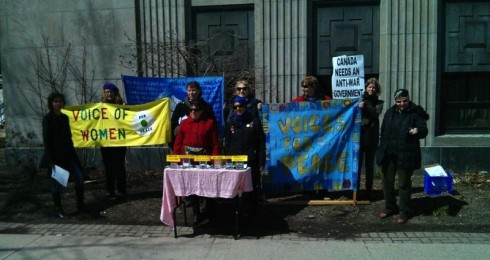 Canadian Voice of Women for Peace (VOW) was there at Yonge and Dundas in Toronto taking action ! 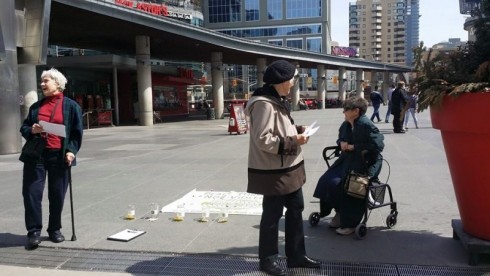 A small group of activists, including members of Veterans for Peace and Women’s International League for Peace and Freedom vigiled outside of the Davis-Monthan Air Force Base with signs expressing the need for funds to meet human needs, not drones and nuclear weapons. 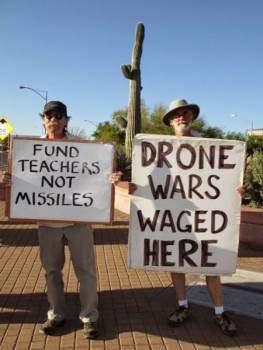 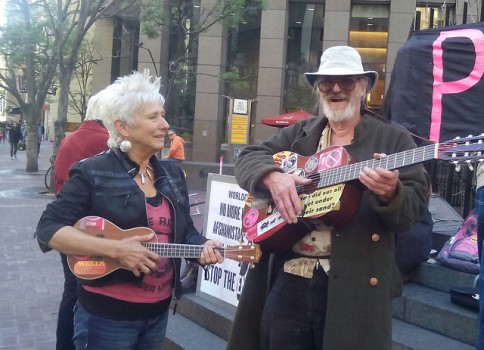 As part of the Bay Area New Priorities Working Group, American Friends Service Committee, SF Friends Meeting, and The Vigil volunteers distributed 800 Global Day Against Militarism brochures Wednesday morning at Glen Park BART Station. A bit nippy with many hands in pockets, they were generally met with some smiles and many takers at the “Happy Tax Day” greetings. Learn more about the AFSC’s San Francisco Wage Peace program launched. 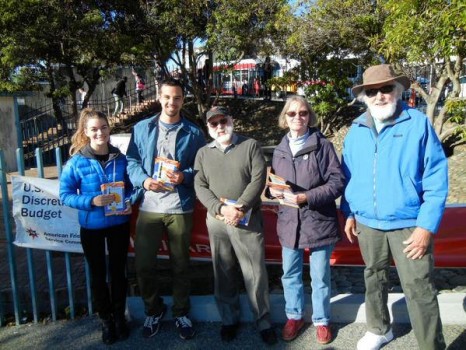 Over 110 volunteers from 37 different organizations distributed  around 15,000 SIPRI brochures at 32 subway stations in five neighborhoods. CODEPINK and New Priorities Campaign Coalition leafletting at the light rail station in Walnut Creek. 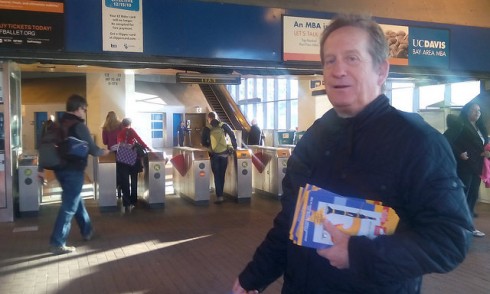 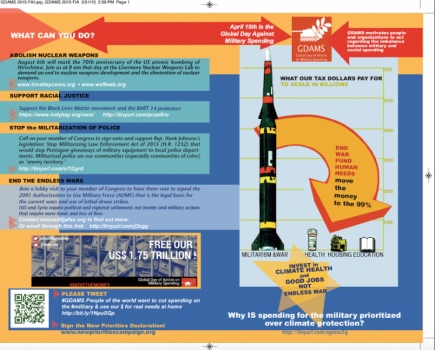 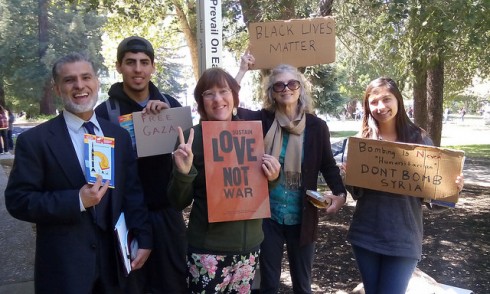 Jerry Coffin of the NWTRCC as part of his 70th birthday celebration passed out leaflets of the WRL pie charts, as well as leaving them alongside the war tax forms in post offices and libraries throughout the area.

NWTRCC members displayed a banner and passed out leaflets at the downtown post office; the Colorado Springs Gazette ran a photo of the demonstrators on April 16th. 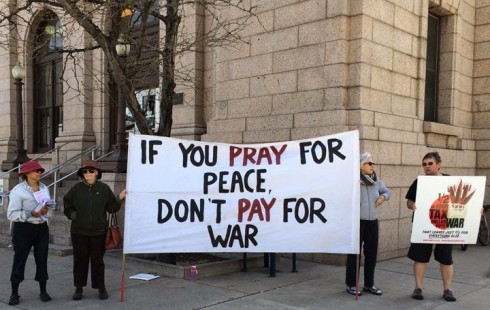 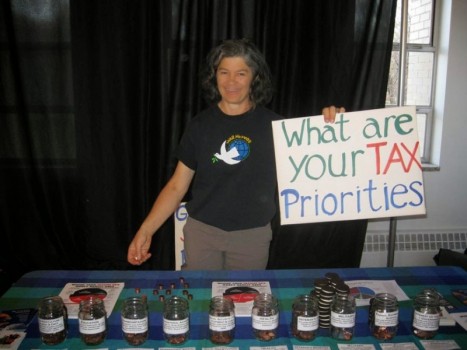 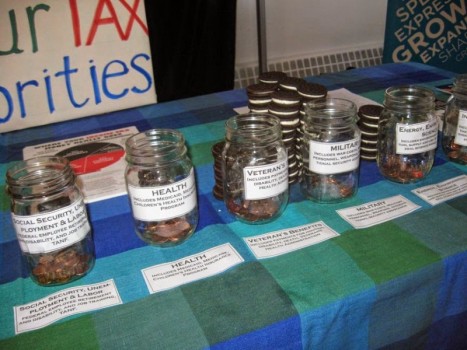 Peace activists including AFSC gathered in front  of the Iowa City post office and demonstrated for the reallocation of income tax revenue away from military spending and into other areas such as education, housing or mental health.

Frank Donnelly of the NWTRCC passed out over 150 of these Maine fliers at the local post office.

During rush hour, about 20 members from Kalamazoo Nonviolent Opponents of War gathered on South Westnedge Avenue in Portage for a ‪Tax Day‬ peace vigil, calling for the government to invest the federal budget in human needs rather than war. Read more about it in the local news. 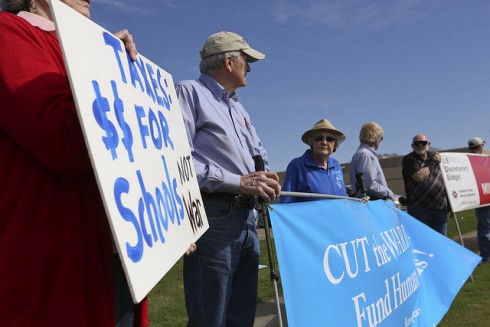 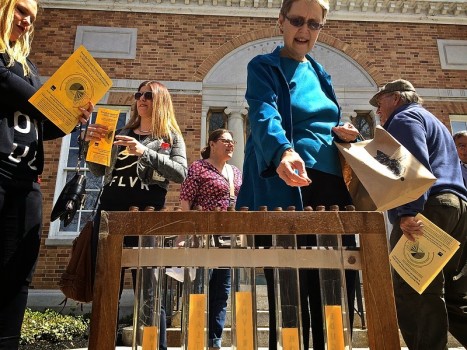 About 20 people from War Resisters League, Raging Grannies, Mennonites and Peace Action gathered with banners, charts and signs in front of the stealthy new IRS location near City Hall in Manhattan and demonstrated for a long line of people awaiting entry to the building. 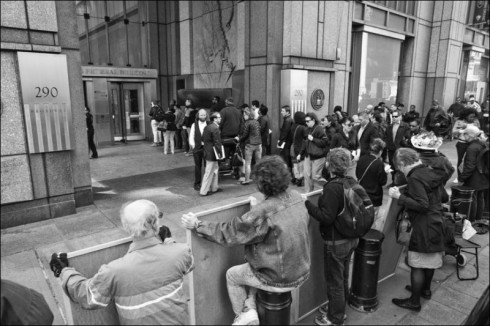 Lane County Taxes for Peace not War, Community Alliance of Lane County, Women’s Action for New Directions and Eugene-Springfield Solidarity Network gathered at the downtown post office to hold a Penny Poll and pass out signs proclaiming “I’d rather pay for ___________ than war”, which participants could fill in and take home or use for demonstration. Raging Grannies followed with a rally in which they redirected taxes in the form of personal checks to about 25 groups, one of which was the Wellspring Friends School, from which a student performed a song about homelessness. 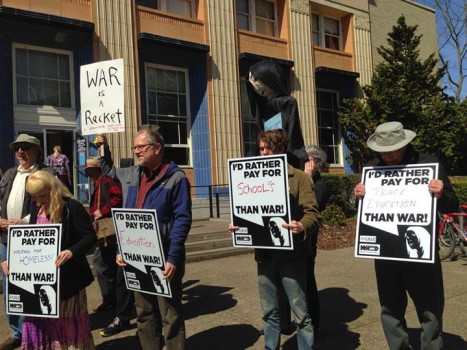 Friends in Portland had their annual Redirection program ‘re-route’ thousands of dollars to five different groups including St. Luke’s Veteran’s Bridge Fund, which helps returning vets get on their feet financially (“something the federal government fails to do)”. 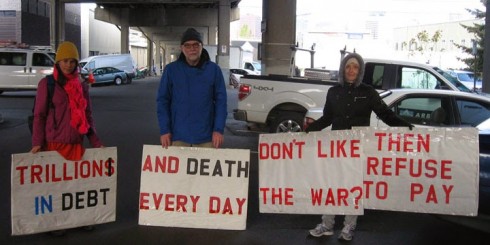 Paul Sheldon of the NWTRCC handed out pie charts denoting the federal budget allocation to military spending in front of the post office.

AFSC and several other groups held a Tax Day Penny Poll outside of a post office in a busy pedestrian neighborhood which over 300 people participated in, many of whom they engaged in conversation about Pentagon spending and where else they would like to see that money going. The polling results for what they believed needed more funding were as follows:
Education: 110
Health Care: 75
Food: 58
Transit: 56
Housing: 52
Veterans: 30
Military: 15 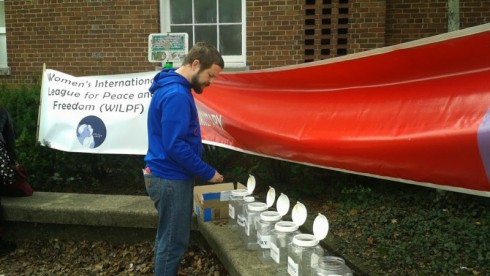 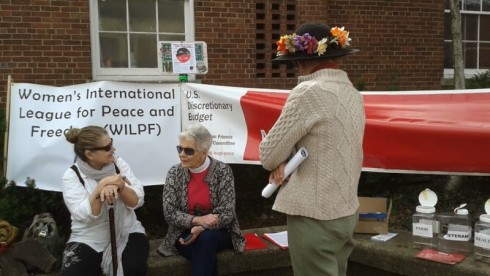 CodePink Austin reprised their Human Penny Poll in the entertainment district, dressing in costumes representing five of the government spending categories and performing a street theatre scene in which the categories clamored for more funding. Participants voted for the categories they felt needed more funding while engaging in spirited conversation about the current budgetary setup and how or why its so contrary to public wishes. 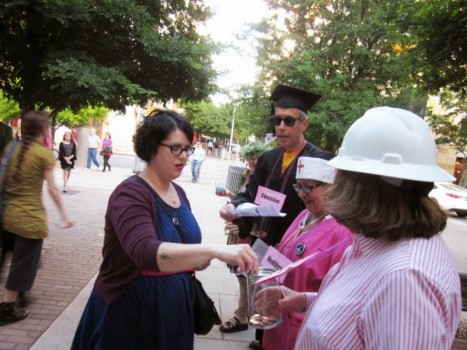 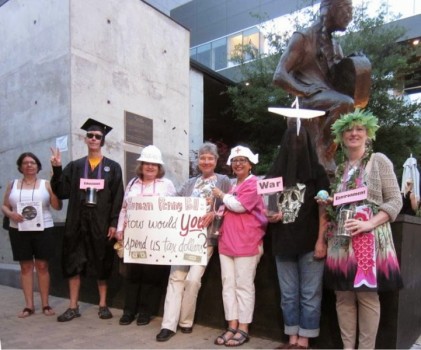 Veterans For Peace members in Dallas, Texas were threatened with arrest this week during their ‪Tax Day‬ actions for GDAMS.
They were quickly confronted by 5 postal police officers and 3 Dallas squad cars while calling for better budget priorities at the main post office center. See more photos. 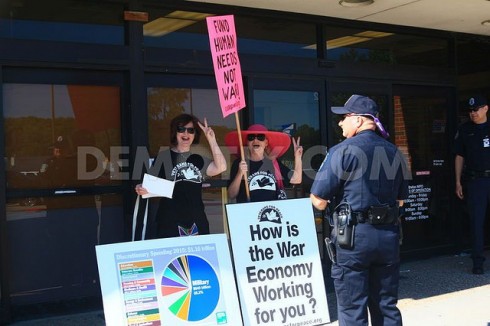 CodePink and North Texas Veterans for Peace demonstrated after dark using a light display, which read “Pentagon Waste ≠ Security”. They were accosted by a police officer who bullied them to leave and even attempted to physically take the light displays until a postal inspector appeared and calmly explained that they were legally allows to demonstrate in front of the post office. 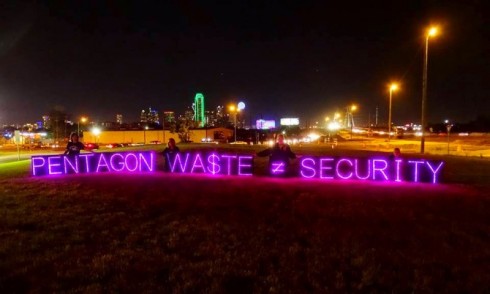 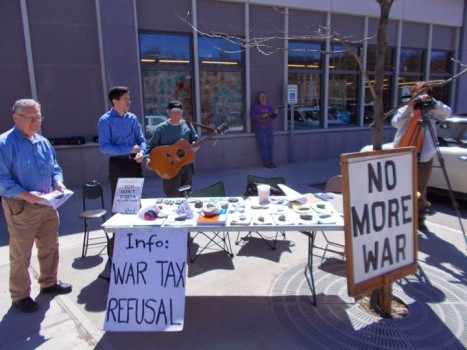 Youth working with the American Friends Service Committee created a public action in Washington, DC after making 14 different visits on Capitol Hill to deliver the SIPRI report.  The youth wore shirts color-coded to represent the current discretionary budget distribution, with ~60% of the youth in red shirts denoting military spending.  With their backs to passersby, the shirts spelled out MILITARY BUDGET ≠ SECURITY.  Then they turned to face the crowd and the message changed to reveal the things that they think DO equal security:  peace, equality, unity, justice, etc. 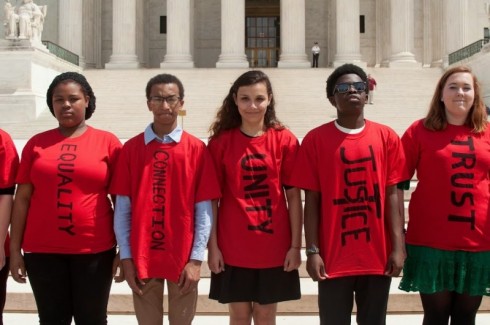