The Cut Milex campaign is directed at introducing the military spending debate in Parliaments during the annual discussion of national budgets. The idea is to generate powerful messages, in order to impact politicians and decision-makers, and to attract strong media coverage.

Cut Milex has a global perspective, asking for a reduction and redirection of military expenses in the maximum number of countries. But it has also a local perspective, as annual budget debates in different countries have specific aspects which make them distinct. Activists in each country must therefore craft their own approach, including how to organize debates with Parliamentarians and how to shape the messages and proposals for them. It is to not only to raise awareness about military spending, but also encourage politicians in Parliaments to take actions against it and to redirect part of the Milex budget to human needs. The idea is to generate powerful messages, in order to impact politicians and decision-makers, and to attract strong media coverage.

Increases in Milex result in more arms, more benefits for the military industry, a more powerful Military-Industrial Complex, more lobbying on governments, an increased arms trade, an increased number of arms worldwide, and an increased number of arms in regions in conflict. Milex increases make wars easier. Conversely, by redirecting Milex to real human needs we would be able to fund the real needs of people: no poverty, zero hunger, a good health, quality education, gender quality, clear water and sanitation, affordable and clean energy for everybody, climate action, reduced inequality and many others. They are needs that focus on people and on their rights. 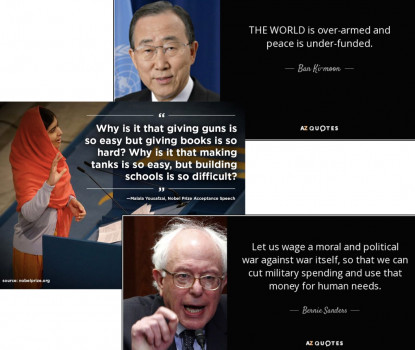