Four press conferences took place on April 29 in Berlin, Seoul, Barcelona and Sydney on the occasion of the Global Days of Action on Military Spending (GDAMS) and the releasing of new data on military spending for the year 2018 by the Stockholm Peace Research Institute (SIPRI). Military spending is estimated to have been $1,82 trillion in 2018, a 2,6 per cent higher than in 2017. All four press conferences presented a critical analysis to this exorbitant spending and claimed for the redirectioning of this resources to cover the needs of people and the planet.

Berlin – The International Peace Bureau hosted a press conference on Monday the 29th of April 2019 in Berlin as part of the action campaign GDAMS. Lucas Wirl, member of the IPB’s Council and International Representative, Director of the International Association of Lawyers Against Nuclear Weapons, Alexander Neu from the Left Party, member of the Defense Committee of the German Parliament, substitute member of the Foreign Affairs Committee of the German Parliament and last but not least Michael Müller, former Parliamentary State Secretary to the Federal Ministry for the Environment and the Association “NaturFreunde” (NatureFriends) were the speakers of this press conference. Together, all three speakers presented and analysed the newly released SIPRI Report on the Military Expenditure of 2018. Each speaker drew on their expertise and elaborated how the increased military expenditure is extremely counterproductive to genuine and sustainable security. Michael Müller commented on the interdependency between the environment and security, he explained that the budget for the military would bring more benefits to human kind if invested in environmental protection programmes, as it is not possible and not morally permissible for privileged communities to believe that we can “live in self created, artificial oasis of peace and prosperity” while the great majority of human kind is suffering under the effects of climate change and environmental destruction. Alexander Neu, explained that the increased military expenditure, in combination with the new idea of European leaders to create an European Army is a development that needs to be very critically examined. The increased armament efforts of especially Germany and France are no where near their promises of fostering peace among and with neighbours of the EU. The “Peace Project Europe” is therefore not build on the concepts of common security and policy of détente, but on demarcation (e.g. Frontex) and the upholding of a hegemonic position on the region. Lucas Wirl elaborated on how the financial resources allocated to the military are much more needed to tackle social issues and improve schooling, health care and inclusion in the society. All three speakers agreed that the money spend on “defence” and the military is too high and more urgently needed for social development programmes. 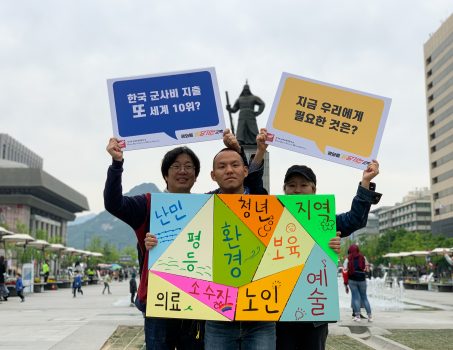 Seoul – Organised by People’s Solidarity for Participatory Democracy (PSPD), it took place at Gwanghwamun Square at 11:00 am and it was followed by a nonviolent demonstration, in which participants publicly questioned South Korean militarization, with a military spemnding that has reached $43,1 billion in 2018, an increase of 5,1 per cent compared to the previous year.
You can see the pictures here and visit their website for more information (in Korean).

Jordi Calvo opened the conference commenting on how an aggressive and antiquated international policy, based on threat, mutual distrust and competitiveness in provoking  “an increase in military spending present in all regions of the world that leads us to a Cold War style arms race but with more blocs, a scenario of confrontation that leads to the growth of military spending in other countries.”

Despite the decline of Russia’s military spending, Moscow’s perceptions of threat explain the increases in many Eastern and Central European countries. At the same time, military spending in Asia and Oceania has increased again, which means three decades of continuous growth, fueled by tensions between countries, China and the United States. The military spending of NATO´s 29 members was of 963 billion dollars, so 53% of the global military spending, which could partly respond, in addition to the growing tension and to the increase demands of military spending by Trump.
Spain remains in the 16th place, with an expenditure of 18,200 million euros in 2018. “According to the calculations of the Delàs Center based on the public data of the Defense Ministry, the amount almost reaches 20,000 million euros” added Jordi Calvo. On the other hand, the coordinator of the Center Delàs has highlighted the important boost that Spain’s public sector has given to the Spanish military industrial complex, making Spain the seventh exporter of weapons in the world, with preferential clients as controversial as Saudi Arabia, having contributed considerably to the warlike capabilities of a country that is involved in the Yemeni War.
In line with the demands of the GCOMS, Luca Gervasoni, president of Lafede.cat and co-director of Novact, has questioned what should be the priorities of the Spanish state in matters of foreign policy, giving some examples as “climate change, world hunger, global inequalities and the violation of rights related to the growing authoritarianism in the world.” In this sense, Gervasoni added that “taking into account the data on military spending, the statement that there are no resources for international cooperation is highly debatable.”
Claudia Bosch, the representative of Rebel·lió or Extinció XR Barcelona, ​​which is part of the global movement for climate Extinction Rebellion, has warned that “the effects of climate change lead us to conflict scenarios, which combined with an increase in military spending, can lead us to an increase of conflicts.” She has also highlighted the opportunity cost of allocating resources to the military sector instead of addressing climate emergency, as well as the environmental impact of military activity.
On the other hand, Pepe Beunza, the first political conscientious objector to military service in Spain, has put in context the fight for the reduction of military spending in Spain. “From the movement of conscientious objectors to the military service, we were able to claim at that time the demand ”military spending for social expenses” and we still claim it” explained Beunza. On the other hand, the historical activist has dismantled the false “bread or peace” dilemma used to justify military spending for the creation of jobs, that he considers “pure demagogy, since it is proved that the investment in social services and education always generates more employment“.
Articles in Spanish on the press conference here, here and here.

Sydney – With Dr. Hannah Middleton representing the Australian arm of the Global Days of Action on Military Spending and the Australian Anti-Bases Campaign Coalition plus other peace groups, giving an introduction to the current figures.
She commented on SIPRI new data and then focused on the Australian case, which is the 12th highest spender on in the world and has the fourth highest per capita military spending. Australian spent about $35 billion last year being one of top 5 spenders in Asia and Oceania (with China, India, Japan and South Korea). The Federal Government is committed to spending $1 trillion over the next two decades. In total, the government will provide the military with S$150.6 billion over the next four years. Trump has been urging Allies to commit to a minimum spending of 2 % of GDP for the military. The Australian military budget will grow to 2 % of GDP by 2020-21. Both Liberal and Labor are committed to the 2% target. The most obvious economic feature of military expenditure is its opportunity cost, that is, the opportunities which are foregone for alternative consumption and investment. “Change requires a commitment for Australia not to have either the weapon systems or military doctrine to be able to threaten the territory of other states. The peace dividend this would produce would release huge sums for health, education, housing, refugees, aboriginal communities, the disabled, the environment and other areas of our society which are currently denied the funding they so desperately need.”
You can watch the full conference here.